Hey interwebs, today we’re going to be talking about the Dungeons & Dragons Rules Cyclopedia: what is it; what’s it used for; and where can you find it, specifically where can you pick it up today without it costing you an arm and a leg?

The other day I was out on YouTube checking out Draven’s RPG Review (which I do quite often). He’s fantastic! His reviews are great (all of his videos are great)! I encourage you to go check out his YouTube channel (if you’re not already a subscriber) and subscribe! He’s got some great stuff! He had posted a video about the Dungeons & Dragons Rules Cyclopedia and how it is now available (print on demand) from The DM’s Guild. I was super excited to hear that this book was available again as print on demand because this is actually one of my favorite books! It’s actually one of my prized possessions! I own an original D&D Rules Cyclopedia, but I consider myself somewhat of a collector and so I thought “hey man I’ll get to because you know two is better than one…” Besides, this way I can use one at the table and one I can just sort of hold on to. So, I think I’ll be using the reprint at the table and holding on to my original so that it doesn’t get any more beat up than it already is.

Regardless, I went out and ordered a new print-on-demand copy of the Dungeons & Dragons Rules Cyclopeia from The Dm’s Guild and it arrived (in three days) and I was super excited so I took a picture of it I posted it on the RollStats Instagram, and the red dragon in on Instagram had posted a comment along the lines of, “hey, that looks like a really cool book what is it?” and so I thought why not just do a quick video review of the Dungeons & Dragons Rules Cyclopedia!

Shameless Plug: if you’re not following RollStats on Instagram you should!

Anyway, the Dungeons & Dragons Rules Cyclopedia, product number 1071 from TSR (Tactical Studies Rules) was originally published in 1991, and what this really is, is a compendium, a true Cyclopedia of the first four of the five boxed sets in the BECMI (Basic, Expert, Companion, Master and Immortal) so it is a compilation of the Basic, Expert, Companion and Master sets. In a way, it made the boxed sets obsolete. The reason I say that the reason that this book is so loved, and the reason I love this book is that it really is the only book that you will ever need to play the BECMI rules set. You could run your campaigns, taking your players from zero to hero, through thirty-sixth level with just this book!

This was definitely a novel concept in not only Dungeons & Dragons, but in role-playing games in general. I think that most publishers like WOTC (Wizards of the Coast) put out tons of core books, supplements, and accessories to get to purchase multiple products. But this book was almost the exact opposite. What it did was take all of the supplements and all the accessories and all the separate boxed sets and combine them into one single source of truth. Which is great for the player but probably wasn’t that great for TSR, because you know they once you purchased this book you pretty much have everything that you need. Although I will say that they did include a big pretty big section in this book on how to convert your BECMI characters into Advanced Dungeons & Dragons Second Edition characters. So, I think that what they were trying to do was to shift folks into AD&D Second Edition. Regardless, this book was a single compilation, so think of it as the core rulebooks. So, this is really the Player’s Handbook, Dungeon Master’s Guide and Monster Manual all-in-one! 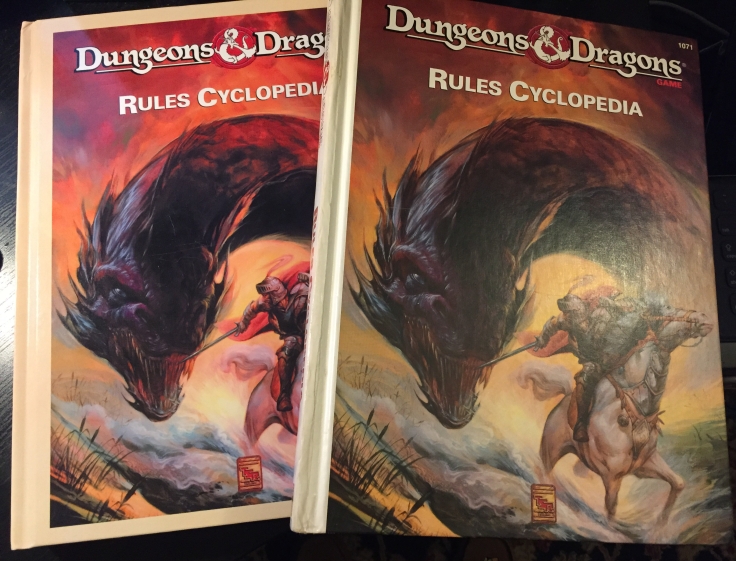 Since I have the original as well as the reprint I thought it might be kind of cool to go through and compare the two, you can see that full Dungeons and Dragons Rules Cyclopedia Review and Comparison on the RollStats YouTube page. And while you’re there please like, comment, and subscribe! It would really help me out, and you’ll get new videos every Tuesday and Thursday featuring Dungeons & Dragons RPG discussion and theory, along with reviews of Dungeons & Dragons RPG Products and Accessories, both new and old.

If you’re interested in picking up a copy of the Dungeons & Dragons Rules Cyclopedia for yourself head on over to the DMS guild and you can pick it up as print-on-demand, and if you have any questions about the Dungeons & Dragons Rules Cyclopedia leave a comment below and I’ll do my best to answer it if I can. Until next time interwebs, may the dice roll ever in your favor!

2 thoughts on “Dungeons and Dragons Rules Cyclopedia Review and Comparison”