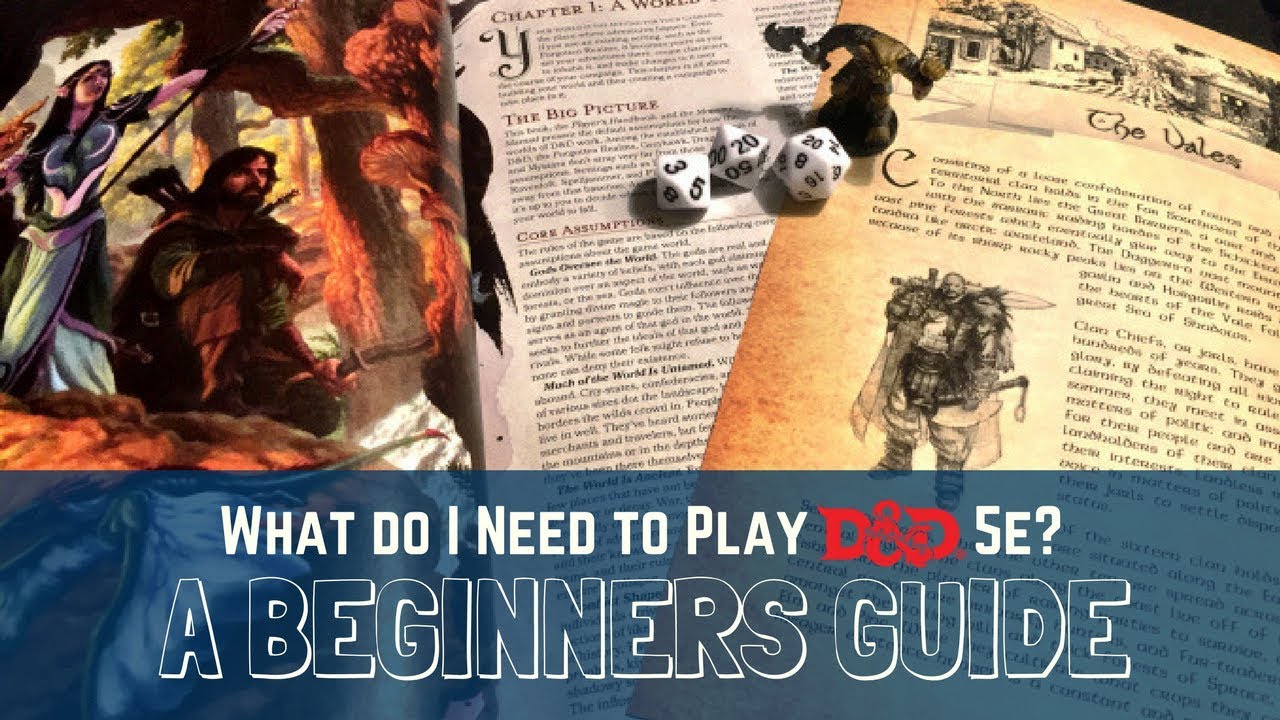 Side Note: I really love the #WaffleCrew! shout out to Holly Conrad, Strix is everything that’s good about D&D

Regardless of which D&D stream you’ve been watching, you know you’ve been watching a Dungeons & Dragons live stream, they’re everywhere. So you’re watching and you’re thinking to yourself, “Hey how do I get in on some of this awesome Dungeons & Dragons 5e action?” There is a mind-boggling amount of books associated with every RPG, and Dungeons & Dragons Fifth Edition is no different. So what should you buy, what are the absolute essentials you need to get started playing Dungeons and Dragons (the world’s greatest roleplaying game)? This post is an introduction to the Dungeons and Dragons Fifth Edition products you need to get started playing today!

You can see the full – What do I Need to Get Started Playing Dungeons and Dragons Fifth Edition? Beginners Guide video on the RollStats YouTube page. And while you’re there please like, comment, and subscribe! It would really help me out, and you’ll get new videos every Tuesday and Thursday featuring Dungeons & Dragons RPG discussion and theory, along with reviews of Dungeons & Dragons RPG Products and Accessories, both new and old.

So, first let’s take a look at the completely free route, what I like to call the trial route. This is the “Hey, I’m not really sure that I like this whole D&D5e thing. It looks awesome! But I’m not sure that I want to plunk down my hard-earned cash on either the D&D5e Starter Set or the core rulebooks route.” And That’s a valid concern! Nobody wants to spend a ton of money and not really know if they’re going to enjoy Dungeons & Dragons as a hobby, or D&D5e as an edition. So, I encourage you to go to the Wizards of the Coast website and download the free PDF’s!

Aside from polyhedral dice, this is all you need to get started. Since all of these PDF downloads are free, It’s a really affordable route (obviously). It’s also a good way to get a sneak peek at the Dungeons & Dragons Fifth Edition game, and it allows you to figure out if this is the game for you if this is the hobby for you, and if this is the edition for you without investing a ton of time or money.

Next up, and I really do recommend this for complete newbies is the Dungeons & Dragons Fifth Edition Starter Set route. If you’ve never played Dungeons & Dragons before, if you’ve never played an RPG before, I would suggest that you go the Starter Set route. Not only because it’s a more complete experience (it does give you everything that you need including polyhedral dice) but it also does some additional hand-holding, especially if you’re considering being a first-time Dungeon Master. The D&D5e Starter Set comes complete with a pre-written adventure (The Lost Mine of Phandelver) that is designed for and geared towards brand new Dungeon Master’s. The Dungeons & Dragons Fifth Edition Starter Set retails for $19.99 and it includes everything you’re going to need to start playing the world’s greatest roleplaying game, including:

*The rulebook that’s included in the D&D5e Starter set does not include rules on character creation so if you want the character creation rules you’re going to have to go out to the WOTC (Wizards of the Coast) website and download the basic rule set from there. The starter set is for complete newbies and sometimes character creation can be a little daunting and I believe they want to get you right into the adventure, so they have included a set of pre-generated D&D characters that you can choose from that represent a good array of different classes and races that have their background already tied to the Lost Mine of Phandelver. One of the things that new DM’s tend to struggle with is tying characters to adventures. In other words, creating a reason for the characters to be there. If there is no underlying reason for characters to be on a particular quest it can tend to lead to murder hoboism.

I do believe the Dungeons & Dragons Fifth Edition Starter Set is the way to go, especially if you are new to the game. I think it’s worth the $19.99 myself, but again you really have to make that choice yourself. I would say that if you’re on the fence as to which way to go if you’re a first-time Dungeon Master get the Starter Set if you’re a first-time player go to WOTC and download the free Dungeons & Dragons pdf.

So now, let’s talk about the route that you are probably all going to take regardless of what I recommend. You’re going to buy the Dungeons & Dragons Fifth Edition core rulebooks (The D&D 5ePlayer’s Handbook, The D&D5e Dungeon Master’s Guide, and The D&D5e Monster Manual). Which is okay, but I don’t know that you necessarily need them. So, here’s what I will say, if you’re completely new to this hobby, if you’re
completely new to RPGs, or if you’re completely new to Dungeons & Dragons don’t buy these books right away. Not just because of the investment, but, because you’re going to become overwhelmed and you’re going to say “Oh, this is too complicated and I want nothing to do with this!” That’s why I suggest you download the PDF from WOTC. They are so much easier to understand when you’re new. It’s an easier read because it’s just a booklet it’s not a massive book, and it gives you all of the basics. Understand the fundamentals, understand the mechanics of the game, and then you can delve deeper.

Anyway, Let’s have a look at the Dungeons & Dragons 5e core rulebooks:

the essential reference guide for every Dungeons & Dragons roleplayer (both DM’s and players) It contains rules for character creation and advancement, backgrounds and skills, exploration and combat, equipment, spells and much more. This book retails for $49.95 (Yup, fifty bucks!) but it’s worth it if you’ve decided that Dungeons & Dragons 5e is a hobby that you want to invest your time in. Fifty dollars in the long run, when you look at all of the hours of enjoyment and pleasure that you’re going to get out of the game is really not that bad.

Side Note: If you’re going to lay down fifty bucks at least read the book. Figure out the rules, it’s not that hard, and then you don’t have to bother the player sitting next to you, or across from you, or your Dungeon Master asking them which dice you have to roll every single turn! It’s in the book! I promise you it’s in the book! If you don’t want to read the book, then go to WOTC and download the free PDF’s! Then you don’t have to read this giant book, at least not right away. I cannot stress this enough, get the basics down, understand the fundamentals first!

know that you need this book, at least not right away. If you are world-building, if you’re creating all of your own content, if you’re not relying on any pre-written material at all, and you’re building a massive world of your own, then yeah, you probably need the Dungeon Master’s Guide. Or, if you’re so comfortable with the rules that you want to start tweaking the game and putting in some optional rules, then, yeah, get the Dungeon Master’s Guide. I guess what I’m suggesting is that if you’re a brand-new DM if you’re brand new to Dungeons & Dragons, if you’re brand new to the game it’s going to be a while before you need this book. It’s going to be enough for you to go through and read The Player’s Handbook, and get your head wrapped around the rules and game mechanics. If you’re brand new to Dungeons & Dragons Fifth Edition this book really isn’t going to do much for you other than take fifty bucks out of your pocket, because this book also retails for $49.95. Once you become more comfortable with the game you will find the world-building advice, tips, and tricks for creating adventures and optional game rules valuable, but you have to walk before you can run.

Those are the three easiest routes you can take to get started playing Dungeons & Dragons Fifth Edition, at least in terms of acquiring the rules needed for the game. But we’re not done yet. Rules aside there are three more things that you have to consider before getting started. The first two are not necessarily required, but the last one definitely is!

So let’s talk a little bit about minis. Dungeons & Dragons miniatures are certainly not required, but I like minis, they can add a really cool tactical aspect to the game which I enjoy. Don’t get me wrong, I’m not uber tactical, but I do like to keep track of where everything is at on the table (where my players are and where the monsters are) and so I do like that aspect. Plus I just kind of like the minis. I think the minis are freaking cool. But, not everybody likes them and they’re not required so you don’t need them. You could play completely theater of the mind “Critical Role style”, where you just describe everything that’s happening, and in your mind you envision it. I wrote a post about Using Minis Vs. Theatre of the Mind in your Dungeons & Dragons 5e Game that you can read if you’re interested in the differences between these two styles of play.

If you go the PDF route, or the Dungeons & Dragons core rulebook route you are going to have to get yourself a set of polyhedral dice. This isn’t actually required, as you could use a dice rolling app on your phone, or tablet, but trust me, you want to own at least one set of polyhedral dice. The price for dice runs the gamut from super cheap bin dice to really expensive metal dice. I recently posted an Easy Roller Metal Dice Unboxing and Review if you’re interested, but you can just get a cheap plastic set of polyhedral dice as well. Whichever you are most comfortable with works just fine, but you are going to want to pick up some dice.

Just take a chance, ask some friends to play and I’m pretty sure that they will. And if they don’t then you should consider finding new friends, but also there are things like D&D Adventurers League and Roll20 where you can find people to play. Hell, hit me up! I’ll set up some sort of game for you, we could run a game on Roll20, it will be great! Seriously hit me up in the comments below if you want to get an online game started. I’m all in, the more D&D the better as far as I’m concerned!

So that’s my post on the three routes that you can take to get started in this freaking phenomenal hobby that we call Dungeons & Dragons Fifth Edition. If you found this post valuable please like, comment, and follow! It would really help me out, and you’ll get new posts every Tuesday and Thursday featuring Dungeons & Dragons RPG discussion and theory, along with reviews of Dungeons & Dragons RPG Products and Accessories, both new and old.

Thanks for reading, and until next time, may the dice roll ever in your favor!

5 thoughts on “What do I Need to Get Started Playing Dungeons and Dragons Fifth Edition?”