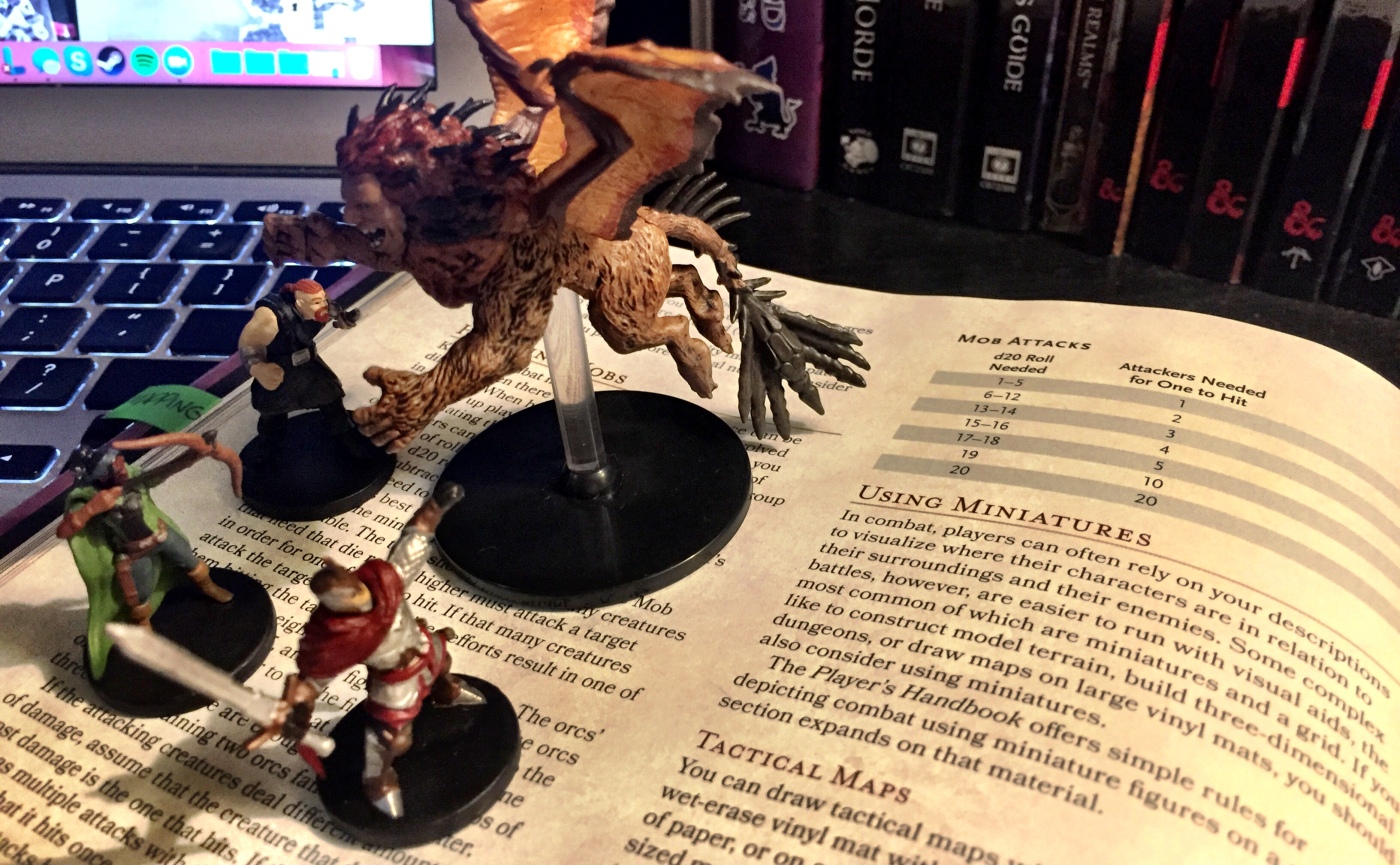 When I first began playing Dungeons & Dragons (way back before the interwebs, in the 80’s) I never used minis. Sure… During complicated encounters, I might draw locations on paper, or use dice just to keep track of where everyone was, but for the most part, I just used my imagination. Not because I had anything against minis (they were, and still are, AWESOME), honestly, it was because minis weren’t as readily available, they didn’t come pre-painted, and they were expensive as hell! I was a kid, and I didn’t have the money to shell out the cash for a set of pewter Ral Partha miniatures, so I made due with what I had.

Flash forward to today when Dungeons & Dragons miniatures are readily available in a wide variety of materials, finishes, and price points. It is relatively easy to find pre-painted, unpainted, plastic and metal minis as singles, in kits, and in bricks to fit almost any budget or campaign with a simple Google search. Trust me, I know… I’ve purchased over 300 pre-painted minis in the last year. (Even some of those cool Ral Partha metal minis I could never afford… I’ll let you know how that painting project turns out)

Having played with and without minis I can say that I enjoy both styles. Neither is better… They’re just different. It comes down to preference, and being aware of the pros and cons of each, and how they fit your Dm’ing and playing style.

Theatre of the mind style play in Dungeons & Dragons: This style of play (as the name implies) happens completely in the minds and imagination of the players and DM. It relies heavily on descriptive narration, shared vision, and some sacrifice of certain game mechanics (specifically as they relate to distances, area, and true spatial representation) for the sake of story telling, and smooth game play. Needless to say, this style of play is not for everyone (read rules lawyers), and it takes some time to get right, but this style of play (when done right) can be a truly satisfying experience. I think it can actually enrich the game play, as it really requires both DM and players to visualise what is happening in their own minds, both must rely more on the picture in their head, than the placement of minis on the table.

These are the pros to Theatre of the mind style play in Dungeons & Dragons as I see them:

These are the cons to Theatre of the mind style play in Dungeons & Dragons as I see them:

Using miniatures in your Dungeons & Dragons game: Using miniatures in your Dungeons and Dragons game is fairly straightforward. It relies heavily on the use of battle mats, terrain maps, and 3D terrain boards to depict and track the movements, actions and placement of the player characters and monsters during gameplay, and more specifically during encounters. It is fairly easy to understand for all players (including new players) and adds a physical reality to your game. If you are unfamiliar with the rules regarding the usage of minis in your game there is a short overview in the 5e Dungeon Master’s Guide (pg 250-252).

These are the pros to using miniatures in your Dungeons & Dragons game as I see them:

These are the cons to using miniatures in your Dungeons & Dragons game as I see them:

So? Which style of play do I prefer?

I know this is a cop out… But I prefer a combination of both. I love miniatures. I use them all of the time, however, I try very hard to not use them as a crutch. They make it easy for me to track movement and space, but I try very hard to never let them represent the scene, for that I rely on narration. Miniatures are a tool, they are not the game, I think that is the important thing to remember. Like most things in life, balance is key.

How about you? Do you use miniatures in your Dungeons & Dragons game? Do you rely entirely on Theatre of the mind style play? I’d love to hear your thoughts! Let me know in the comments below.

P.S. Don’t forget to follow @rollstats on Twitter in July to be entered to win a new copy of “Elminster’s Forgotten Realms” Details here –> Time for a Roll Stats Giveaway!

5 thoughts on “Using Minis Vs. Theatre of the Mind in your Dungeons & Dragons 5e Game”